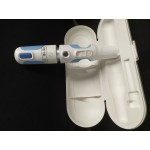 Our company was founded in 2007 as a high-technology company focusing on the research and development, production and sales of needle free injector. Annually the company produces up to 200,000 pieces of injectors and 15 million pieces of consumables. The company has been certified by CE mark, ISO 13485 and CFDA.

In 2007 QS-M development was completed. In 2012, QS-M needle free injector obtained the CFDA registration certification. In 2013, we have completed GMP (Good Managing/Manufacturing Practice).

Email to this supplier